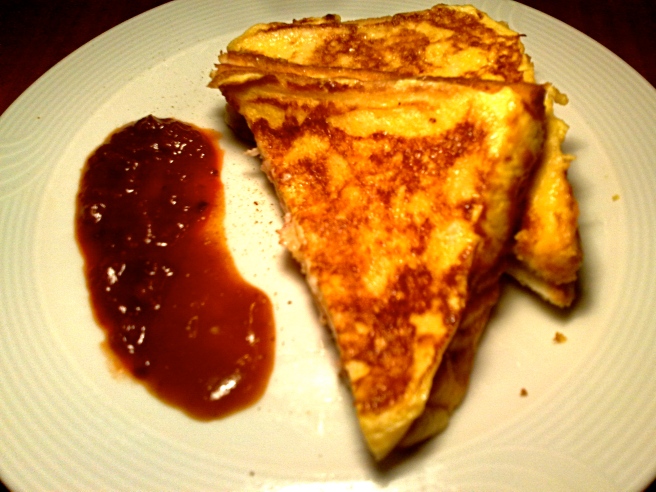 In my first week here in Germany, I just felt extremely lazy, cooking-wise.  It was probably fatigue from jet lag or adjustment-jitters that led to the lack of enthusiasm when it came to food.  On top of that, I knew it would still be weeks before I received my first month’s stipend and so I had to scrimp on materials for my usual culinary experiments.

In my first week, all I had in my pantry and refrigerator were the following:

I didn’t even have oil! 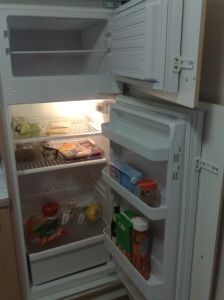 Only the middle shelf was mine then. Everything else belonged to my flatmate.

Every day that week, I would have my muesli with milk for breakfast.  I would then have a hearty lunch in the DKFZ or the University Mensa.  When I got home, it was just juice, bread, ham, cheese, and curry ketchup for dinner.  Sometimes, I’d cook an egg too, but only if I was driven enough to heat something. I was that lazy. 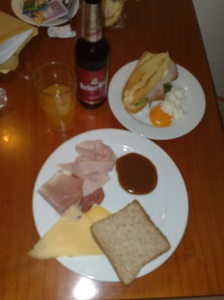 By the fifth day, I was getting tired of my usual fare so I modified. Just a wee bit, though. The only new thing I did was I seared the ham and threw in scrambled eggs after.

By the seventh day, I started feeling so deprived.  I thought, “I need to liven this up or I’ll go crazy before my next supermarket visit!”  Then I remembered I could make a pretty neat fried sandwich with the ingredients I had.

So here it is: an easy-to-make dish that livens up the lowly ham and cheese sandwich. 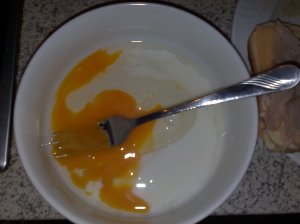 3.    Assemble the sandwich, but make sure it’s even and not too bulgy 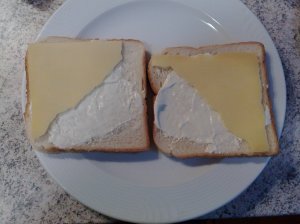 4.    Dip the sandwich in the egg-milk mixture. Make sure both sides are coated well.  The mixture should be good enough for two sandwiches. 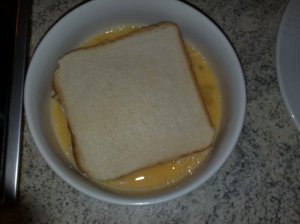 5.    Make sure the pan with the rendered fat is very hot.  Place the soaked sandwich.

6.    Cook the sandwich until both sides are light brown or the faces begin to be more crisp. 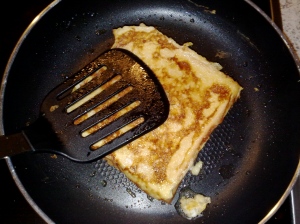 Traditionally, such a heated sandwich would be called a Croque Monsieur in France.  It can be grilled and served with additional melted Gruyere and some béchamel sauce on top.  If a sunny-side up is added on top of this, it is called a Croque Madame.  In the United States, the fried ham and cheese sandwich is called a Monte Cristo.  This version is very similar, though is usually fried in butter and served with powdered sugar or some fruit preserve. 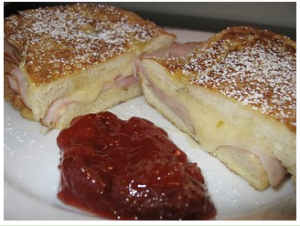 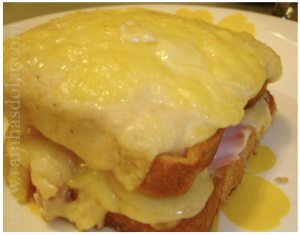 For this version, I had to render the ham fat since I had no oil!  A better alternative would be to sear the sandwich in butter. The final Croque is more filling than a usual ham and cheese sandwich.  The molten cheese should go well with the crisped ham and bread.

•    Serve the croque with various sidings or dipping sauces.  For my croque, I served it with the chili curry ketchup and the  sundried tomato ketchup
•    Cut the sandwich into mini-triangles and it can be an appetizer.
•    Transform any other sandwich into something special by this method.

Oh, and as an end note, on the eighth day of my stay, I couldn’t stand it anymore so I shopped for all the ingredients I needed.  If you’re curious,  here’s what’s in my kitchen pantry and fridge now. 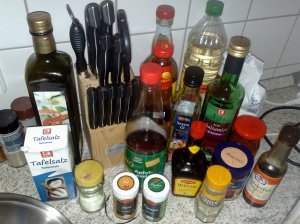 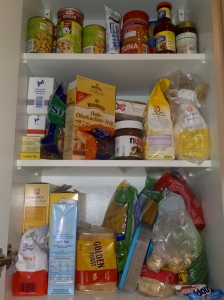 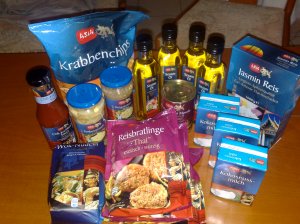 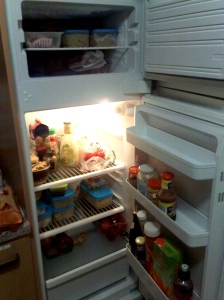